In 1899, when Arizona had not yet gained statehood and Arizona State University was a fledgling institution known as the Tempe Normal School, Zebulon Pearce was freshly graduated with teachers credentials and looking toward the future.

In the years that followed, he became a household name in Mesa, first as the owner of a produce and feed store on Main Street, then as the Arizona distributor of Colorado’s Coors Brewing following the end of Prohibition in 1933. He would also leave his mark in public service as a member of the Mesa School Board and as the city’s mayor from 1944 to1946.

Zebulon died in 1969, but his legacy lives on at The College of Liberal Arts and Sciences through the Zebulon Pearce Distinguished Teaching Awards. Established in 1973, the annual endowment honors standout teaching from across The College’s 23 departments and schools.

The awards are an important part of The College’s history. Now, enshrined on a plaque at Armstrong Hall, they’ll also be a permanent part of the future.

The College unveiled the plaque inside the newly designated Zebulon Pearce and Family Conference Room this week. The event also honored the family’s continued support of student success and access programs, and their recent backing of research initiatives at The College’s Institute of Human Origins.

For his grandson, Arthur “Art” Pearce II, Zebulon’s time at ASU is the seed from which subsequent Pearce generations grew their own Arizona successes.

“If it wasn’t for Tempe Normal, I don’t know where I would be today,” said Pearce, who became a third-generation ASU alumnus after graduating with a business degree in 1975. “That’s why we choose to give back; everything we have can be traced back there.” 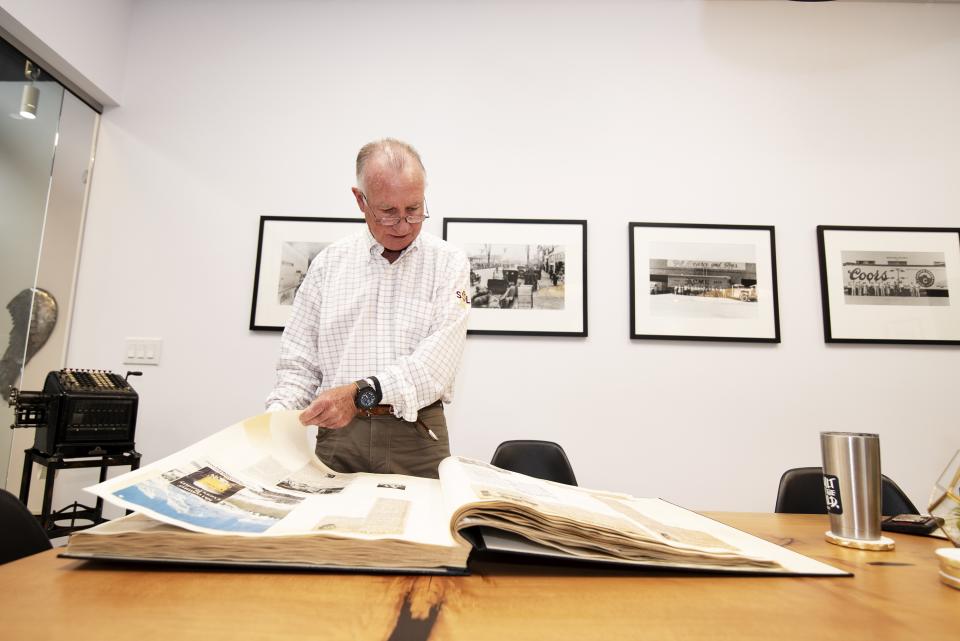 With Pearce at the helm of their philanthropic support, the family pledged a five-year fund to support PhD students working through programs at the Institute of Human Origins. Founded in Berkeley, California in 1981 by famed paleoanthropologist Donald Johanson, the institute found a new home at ASU in 1996.

PhD students work hand in hand on research with several world-renowned faculty members from The College’s School of Human Evolution and Social Change. Doctoral tracks last up to 5 years. Philanthropic efforts like those made by the Pearces are essential building blocks to driving research forward.

“The Pearce family has a long legacy of philanthropy at ASU and throughout Maricopa County,” said Patrick Kenney, dean of The College. “Art’s most recent gift will advance our efforts to ensure student success and further research initiatives at the Institute of Human Origins; as an expression of our gratitude, it is our privilege to rename the most prominent conference room in Armstrong Hall in honor of Art’s grandfather, Zebulon Pearce, and the Pearce family.”

This is not Pearce’s first interaction with the institute. He and his family have participated in a number of its benefactor trips to global anthropology hotspots spanning the Galapagos Islands,  Ethiopia and, most recently, the Grand Canyon.

He said learning about the history of humankind is something he’s always been passionate about. Fueling that research philanthropically is a way to keep it going.

“ASU’s stature and the research it conducts have gone worlds above many institutions now,” he said. “It’s fascinating learning more about where we come from and how we survived, and it’s great to see that at The College.”

Pearce said he likes to think another way the Pearce’s family legacy shines on is through the work of his own children. After graduating from The College with a degree in anthropology and a minor in art history in 2010, his daughter Jessica Pearce went on to pursue a master’s degree in education at the Mary Lou Fulton Teachers College. Today, she works at ASU in the Study Abroad Office.

His other daughter, Meghan Alfonso, is the founder and CEO of the Scottsdale-based Pearce Family Foundation, which helps Arizona families who have children with chronic diseases.

The family has also given back to the university in other ways. Pearce commissioned local artist Jeff Carol Davenport to create both the Pat Tillman Statue and the towering bronze pitchfork now found at Sun Devil Stadium. He said his efforts both at The College and ASU are driven by a core motivation — saying thank you.

“My grandfather is the one who made my daughter’s foundation possible and our family’s success come to life,” he said. “We now have the means to give some of that back to ASU, so why not recognize the man that started it all?”